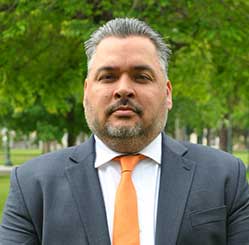 Mr. Spencer is a proud father and Bay Area native. He was born and raised in Vallejo and first moved to Oakland in 1996. As a teenager, he sustained an industrial injury while working for a large corporation. The injury resulted in his inability to return to his usual and customary occupation. After being turned away by the workers’ compensation insurance company, he retained Anthony G. Ratto, Esq., a well known and respected Oakland workers’ compensation attorney to represent him in his claim.

In addition to working on workers’ compensation cases, Mr. Spencer is involved in or is overseeing marketing and advertising, strategic planning, human resources and many other aspects of Ratto Law Firm, P.C.